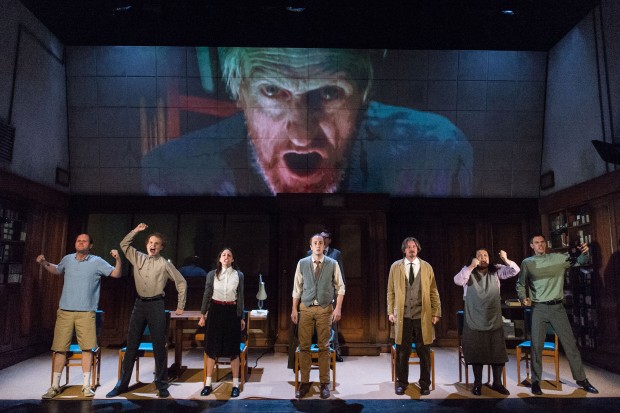 When they come for you – as they must if you commit a thought-crime, which you are bound to do – they don’t just want to beat, torture and kill you. They want to take out whatever was in your mind and fill it with themselves, so that it’s pure. Your sense of reality is a fiction, and they – the Party, “Big Brother”, the all-powerful maybe eternal forces of totalitarianism – get to write that fiction.

Anyone can glean as much from George Orwell’s dystopian masterpiece. What Robert Icke and Duncan Macmillan, co-creators of this remarkable, radical touring version for Headlong, have further noticed is that that sense of mental invasiveness – that applies to the act of reading too, doesn’t it? To judge by the appendix, Winston Smith’s nightmare is long-past and he looked to an unknown future, our present. We put ourselves in his shoes but we’re also figments of his imagination too. Are we free, as he isn’t; or slaves in ways we haven’t grasped?

The clock strikes thirteen – time is out of joint. Mark Arends’s Winston sits alone at a table, daring to write a diary, but he’s also a ghost-like presence at a book-group, discussing his actions as though they were fictional; the world he inhabits, appears lost in, is a known commodity and it bleeds, as if at some subconscious level, into the contemporary framing device. The chocolate-deprived child sitting watching the flat-screen telly while the adults pontificate is a little menace; the signature sound of “Oranges and Lemons” is heard in a mobile ring-tone; there are power failures.
Even when Orwell’s narrative takes hold, it’s as if it’s recorded. There are sudden freezes. Parsons’s bovine conversation recurs as though on a loop. It’s like the theatrical equivalent of double-think; what we see is, and is not, all at once; it’s up to us to hold the contradictions together. Icke and co are playing mind-games just as O’Brien does when re-educating Winston in the Ministry of Love using rats – a notorious sequence rendered with clinical, spine-tingling finesse here.

You can quibble at the absence of some of the book’s most memorable aspects. I missed BB’s ubiquitous eyes following us, for example. But this risk-taking experiment – a doubleplusgood collective effort that employs an ingenious video design (by Tim Reid) without looking gimmicky – supplies ample, thrilling compensations. Above all it points us back to the novel, revealing it as fully – philosophically and politically – fit-for-purpose in the 21st century, and quite possibly timeless.

headlong.co.uk. First published in the Daily Telegraph 21 Sep 2013 . An audio interview with the adaptors can be found at theatrevoice.com here