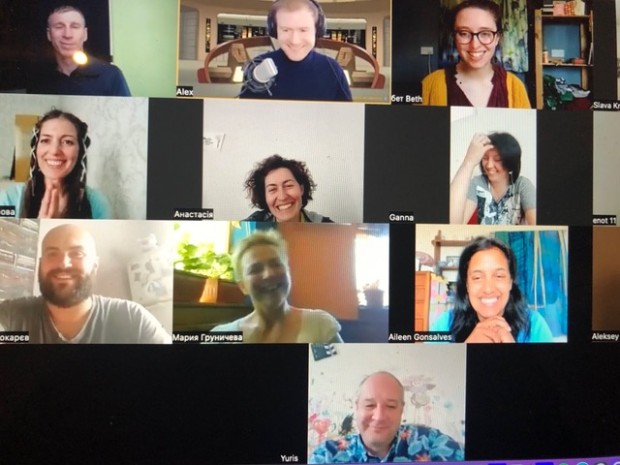 Aileen Gonsalves, who founded Butterfly Theatre Company and is the creator of the Gonsalves Method – specialising “in immersive theatre with a focus on truthful, authentic and moment to moment performance that makes the audience feel something real” – recalls some of the work she has done with Ukrainian artists this year. I spoke to her via Zoom; the following is an edited transcript of our conversation, 20-11-22. …
Six weeks before the invasion [Feb 24, 2022] Butterfly actor/puppeteer Bethany Greenwood and I had started working with a group of Ukrainians led by producer Natalia Sklyarska, who galvanised the theatre community in Kiev into doing street theatre. She said that it wasn’t something that was done there – whenever they told people about doing outdoor theatre, they didn’t understand what she was saying.

So Butterfly got involved helping make a street theatre project with them and we’d meet actors, directors, people in education and so on via Zoom once a week. Week One we had a great time – they were a great group, so enthusiastic. As each week went by, we in England would be saying to ourselves: “Have they not got Russian troops on the border? Is no one going to speak about it?” By the fourth week we just brought it up.

And they were completely calm – “We’ve been in a war zone for eight years, they won’t do anything”. The week before the invasion, the last week, was the first time they said “Yes, we are a little bit nervous now”. The show then went ahead, on the Sunday before the invasion [Thursday], in the Kontraktova Square in Kiev. It was fantastic – there were about 50 kids in tiger masks taking part in this show about tiger and a hunter, with musicians following around. It was a piece effectively about being bullied by a greater force, though they didn’t really seem to see the metaphor. There was quite a lot of denial.

Then after the invasion started, we worried about everyone over there. From that moment, I kept in touch by email and Facebook. We said “We are here for you, let us know what we can do”. Within a month, they were all over Europe, they had scattered. I said “I know it seems mad, but the only thing I can really do is offer your artists acting classes”. They said: “We definitely want that, we’re stuck in different countries”. So I said OK. Natalia and Masha [Natalia Sklyarska, producer and Maria Grunicheva, director] put out a call to their network. They made a Facebook group to communicate with artists in Europe.

Each week I’d post the class Zoom link and say ‘Come if you want to come’. So it was quite fun, there were about 30 actors, directors, choreographers. The most bizarre thing was I said ‘What would you like to do?’ They said: Shakespeare’s sonnets. So I said ‘OK’ and we would meet online, they’d do them in Ukrainian and I was teaching my acting method. They didn’t know where they all were, so they’d be saying to each other “Where are you?”. We did that for a couple of months.

They were massively committed. That moved me and kept me going. They’d learn their lines and come prepared. That gave Masha the idea: could we create something online? We showed them the online Christmas Carol that we did during the pandemic and settled on A Midsummer Night’s Dream because they knew it and also knew that if they did it in Ukrainian, those watching abroad would follow it. Masha set up a company, StageUA, bringing in a dozen or so other actors to create a bigger unit.

They were dotted across 12 European countries – including Spain, Italy and Germany, as well as some in Ukraine. They used the play as a chance to escape and focus on something else. We taught some online acting skills we had learnt during the pandemic and they would come back and show us what they’d done. And they were a hundred times more inventive than we had been pushing Butterfly’s Technical Director Alex Gray into new territory.

We would always say: “How are you all doing?”. They were very excited about rehearsing and wanting to show us what they’d done. It was strange: we got into the bubble of the play as actors often do, but we felt close to the war – they would suddenly say things like “We’re having to walk back from the bomb-shelter”, or, “We can’t meet today because of the power cuts”. The rest were perhaps feeling a bit guilt-ridden that they weren’t in Kiev – there was a real distinction between people who stayed and the people who are safe but on someone’s floor.

They performed Dream about five times over the summer, including a special performance for the military. It’s a hard sell overseas, because of the language barrier. But what struck me was the inspiring boldness of their approach – they use their bodies in completely different ways.

Everyone is now looking to see what might be done next. There are two projects they want to do: an English-Polish-Ukrainian project around children and being displaced and also something to do with promoting Ukrainian culture – they’re passionate about the fact that people think their culture is Russian, so the focus would be on a street carnival, or something of that type.

Has British theatre done enough to help Ukraine? I think our theatre is sadly so embedded in its own problems it has really lost sight of its role – it doesn’t realise how world-changing it’s supposed to be, all the time. It has become very inward-looking. Coming out of the pandemic, people were waiting to hear about Arts Council NPO funding, worried about their own affairs. I’d love to see British theatre be more outward-looking in 2023 and come together as a unified force with a unified voice to speak up in solidarity about the war happening so close at hand.

Watch The Tiger is Coming, possibly the last newly created theatre work to be presented in Kiev before the start of the war