The joy of amateur theatre 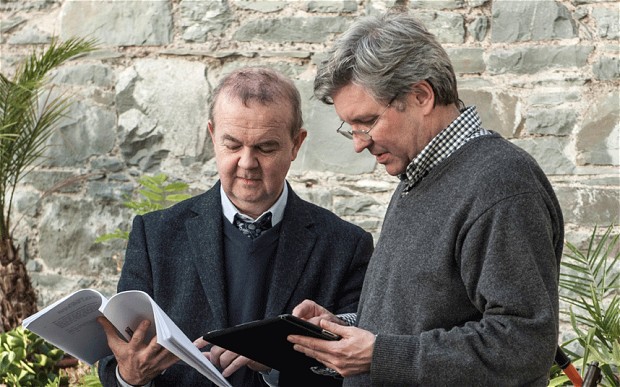 “We have to be slightly careful with Burt still being alive about what we can tell you,” Ian Hislop says, with a slight snigger, down the line from his editor’s office at Private Eye.

A Bunch of Amateurs, the 2008 comedy film that Hislop co-scripted with the magazine’s cartoonist Nick Newman, and which starred Burt Reynolds, is making its way to the stage this week for the first time in a production at the Watermill Theatre, Newbury.

One of the most intriguing aspects of the film – which reportedly found favour with the Queen – is wondering how far life mirrored art in its making. For those who don’t know it, the story-line is simple and inspired. Jefferson Steele, a fading Hollywood screen-star, winds up in an English village am-dram production of King Lear thanks to a desperate sleight of hand by his put-upon agent. He is grumpy, demanding and arrogant and proves not only ignorant of the Shakespearean basics but no great thespian either. With a fine cluster of British talent in supporting roles – Derek Jacobi, Samantha Bond and Imelda Staunton – the film defers to Hollywood royalty only to assert the need for living legends to learn to rub along with ordinary folk.

Reynolds is supposed to have said that it was the one project he really wanted to do but then had nothing to share about the experience, which involved filming in the middle of winter on the Isle of Man. “I think he was so unwell, he drifted through it. I’ve never heard him talk about it, ever,” Newman says. There’s no suggestion that Reynolds suffered any lapse in manners or that, like Steele, he came up with prima donna-ish demands for a hot-tub, but you don’t even need to read between the lines to glean that Hislop and Newman were left more than nonplussed at times.

“We’re very keen on writing a film about the making of the film – that would be a lot funnier,” Newman jokes. “The one thing we can tell you,” Hislop chips in, “which the producer [David Parfitt] told us and which very much established our place in the pecking order, is that he had spent more money on Burt’s wig than he had on us as writers.” It’s only now, in the stage version, that some of the best speeches they wrote for Steele will be aired. “There were lots of big tantrum scenes where he lets rip but I’m afraid those scenes never got shot because they were, erm, a bit long to remember,” he continues. Newman adds: “Instead of doing what we would want him to do, he would just say: “I can do this whole scene with a look!”” They laugh.

Reynolds can at least be said to have indirectly helped to strengthen the latest script, Hislop reveals. “The costume lady had to go out to LA to talk about what Burt was going to wear. At that stage, he was very keen that he would let it all hang out and that you would see him getting out of his corset. He said to the costume lady: “Pull my hair”. She reluctantly did so. He said “The stuff that keeps this on is the stuff that keeps the space shuttle together.” That has managed to make it into the play!”

What’s refreshing about A Bunch of Amateurs is that instead of making the village amateurs the obvious butt of jokes, the film renders them sympathetically – most of them are agreeable, dedicated people trying to put on the best show they can. Hislop and Newman first became friends in a school play about the Peterloo massacre in 1974 at Ardingly College and Hislop has retained a fondness for the stage ever since. “I was part of an amateur troupe when I was younger, in my teenage years, in Sussex,” he says. “I enjoyed it hugely and found it very rewarding. Quite a few of those experiences influenced the script and we found that a lot of people who have worked in am-dram really warmed to the film.”

In a neat further twist, this stage premiere of A Bunch of Amateurs sees the professional cast being augmented by a bunch of local amateurs – a “community ensemble” of 16 who serve as the stage-management characters of “the Stratford Players Dramatic Group”. If the show leaves you itching to get stuck into all things am-dram, it feels like there may never have been a better time to give it a whirl.

Attending the Theatres Trust conference in Leeds last month dedicated to “Community Theatres” brought it home to me that many major regional houses, among them the West Yorkshire Playhouse, are putting a renewed accent on working with local people in a variety of capacities. And thanks to the Coalition, the empowering benefits of the Localism Act of 2011, designed in part to make it easier for communities to take over the running of buildings to foster cultural provision, are starting to become apparent.

The conference heard from a cabbie called John Caldwell who has been battling, along with other passionate locals in Stourport-on-Seven, Worcestershire to give the Civic a new lease of life. “We are all amateurs,” he explained. “None of us have professional experience of running a venue or events programmes. Half of us didn’t even know the proper technical terms for stage equipment.” But the results have already been striking. There were just 30 bookings a year when they took over from the council. Last year that had risen to 300. With voluntary and amateur arts groups accounting for a fifth of all arts participation in England, and around 9.4million people taking part in total, according to the last big report for the Department of Culture Media and Sport, perhaps we should stop seeing ourselves as a nation of shop-keepers and more as a willing and able army of amateurs.