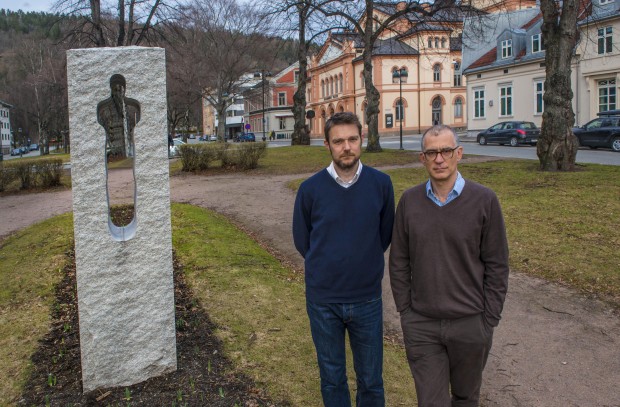 The Events, David Greig’s acclaimed play about the aftermath of a massacre, has returned to its Norwegian source. What did its first-night audience make of it? First published in the Daily Telegraph, Apr 05 2014

A man stands on stage and points his fingers at a woman as though he were aiming a gun at her. “I have one bullet left,” he says. “Who is it for? Which one of you is it for?”

That’s what you’d hear if you translated his words into English. On this evening in late March, at Drammens Teater, a plush playhouse in a suburban town 30 minutes from Oslo, the man is speaking Norwegian. “Jeg har bare en kule,” he says. “Hvem er den til?” Even if you didn’t understand the words, you’d instantly grasp the seriousness of the threat.

I first saw Scottish playwright David Greig’s The Events at its opening performance in the Traverse theatre in Edinburgh, last August. At the time, I was gripped by this pivotal moment, in which the unnamed perpetrator of a mass shooting revels in his power of life or death over a young choir leader called Claire. This was only one of many elliptical and absorbing dramatic encounters.

Greig was impelled to write The Events in response to the violence unleashed on July 22 2011 by Anders Behring Breivik, who shocked the world and shook Norway to its core by turning a Workers Youth League (AUF) summer camp on the island of Utøya into a bloodbath, having first detonated a car-bomb outside government buildings in Oslo. In all he killed 77 people, many of them youngsters, and left 319 injured, many of them gravely.

Like Greig’s heroine Claire, a priest who almost loses her sanity in her quest to understand the loner who joins and then destroys her multicultural choir, the playwright had become obsessed with trying to fathom what made the Right-wing extremist tick – and flip. The resulting drama was as economical as it was experimental. Just two actors were needed, the male taking on multiple roles, not only of the killer but also those with insights into his actions and even Claire’s female partner. The added ingredient was a supporting choir of local singers drafted in from wherever the production might be playing. The show ingeniously explored the urge to understand mass murder and the limits of that understanding. While its conclusions seemed bleak, the choir’s vitality and solidarity felt wonderfully life-affirming.

But for all that potency and poignancy, the show in the UK – such a success for the Actors Touring Company (ATC) and its artistic director Ramin Gray that it’s still out on the road – allowed audiences to feel removed from its dark Scandinavian origins. Occasional references located the piece in Greig’s native Scotland. You might recall the Dunblane massacre of 1996, perhaps. You didn’t have to think of Utøya.

On its opening night in Norway, however, Hendelsen, as the play is titled here (and which translates as “event”), will strike home hard. Drammen is the capital town of Buskerud, the county that contains Utøya, which is a 50-minute drive away. A stone’s throw from the theatre, facing the river, stands a memorial to three local teenagers who died in the tragedy, the youngest aged 14.

I learn that during the afternoon’s dress rehearsal, members of the Drammen International Gospel Choir – an inclusive, multicultural project of precisely the kind Greig envisages – were left in tears after watching some of the scenes for the first time. “It took us back to the day it happened,” one of their number later confides. “We remembered the helicopters flying over this town that night, bringing people to the hospital.”
Apprehension and anticipation builds before the performers wander on to the stage to begin their choir practice, as though everyone was invited into their warm rehearsal space.

“I don’t think people will stand up and scream, ‘This is wrong, stop this!’ ” reflects Elsa Aanensen, the artistic director of Brageteatret, the company presenting this touring premiere in a co-production with ATC. But she can’t be certain. Last month, controversy engulfed plans for one of the permanent memorials chosen to honour the dead – Memory Wound by the Swedish artist Jonas Dahlberg – when the mother of the youngest victim complained about its location and a lack of consultation with the bereaved.

Last year there was much heated discussion when a Danish theatre company called CaféTeatret brought over Manifesto 2083, based on the document Breivik distributed shortly before the attacks. And when Greig and Gray visited Norway in 2011 to talk to people and do research, the scepticism captured on the streets by a TV news crew almost set off a backlash against The Events before it had even been written.

“We still have a big wound in this country,” Aanensen explains. “I certainly think about those events and that day whenever I pass Utøya. I think that’s true for many people. It felt like our 9/11.” She consulted a number of survivors before proceeding, all of whom approved the idea, but admits she heard nothing after sending a letter outlining the project to the Workers Youth League. The choirs involved have needed reassurance too: “The worry was that there might be shooting and on-stage deaths.” She wants to set off a debate, not cause a disturbance.

“When I wrote The Events, I was always thinking about tonight,” Greig, 44, confesses over a cup of coffee after he arrives in Norway on a flying visit. “I knew there would come a point when I would have to place this play in front of a Norwegian audience. I had to feel I could hold my head up and say, ‘There’s nothing in this that is easy, sentimental or tawdry.’ ” Although as outwardly calm and articulate as ever, he has, he says, a gnawing feeling in the pit of his stomach.

When the hour finally arrives, two things are immediately obvious. First, that the theatre is not full, a possible indication that the company has been soft-peddling on marketing to avoid any sensationalising effect, or that the public is still wary. More importantly, it is suddenly clear how close to the bone the play is – and the performances take the work to a new pitch of intensity.

Local resonances are pronounced from the start. In the opening scene, the choir joins in rousing folksy rounds of Norwegian Coffee Song as Heidi Gjermundsen Broch’s radiant Claire vainly tries to welcome in Rolf Kristian Larsen’s silent, sinisterly impassive, “Boy” – here white and bearded, rather than an ethnic “outsider”, as he is in the UK production.

Larsen has drawn on mannerisms observed during Breivik’s trial – “I wanted the body language to be more relaxed than his to bring out the creepiness of that fixed smile,” he tells me. Partly as a result, Breivik-like assertions about “foreigners” and the urge to be famous, as well as allusions to the FAQ sections of his manifesto stand out more than ever. As do the risks inherent in Greig’s even-handedness; confronted in prison and asked to explain himself, the Boy is normal, pathetically inadequate. “I just got a bit obsessed with Aborigines,” he mutters.

There is no discernible weeping, wailing or complaining from the audience, yet the rapt attention is unmistakable and at the closing song – a haunting, specially composed ballad called We’re All Here (Vi Er Her Alle Sammen) – you can feel the room unifying in sorrow and defiance. Greig and Gray join the curtain call to loud applause, clutching roses – the flower adopted as the emblem of grief in 2011 – with the rest of the company.

It will take a while longer to get the measure of Norwegians’ reactions to the work – the tour eventually winds up in Oslo, with a choir drawn from the commune near Utøya. But the response so far has left Greig feeling quietly vindicated. He says: “I had a particularly touching moment where a lady came up to me who had a daughter on the island of Utøya and a son who was a security guard at a building that was bombed. Both survived but she had a very close relationship to what happened. She said that up until now she thought she was weird because she had all these arguments going on in her head – and Claire had articulated all those things.”

Gray, too, exudes relief afterwards: “This could have gone horribly wrong in so many ways – it was a real act of faith. I sat there thinking ‘Phew, this is OK and I’m proud of it.'” Ine Therese Berg, a young critic from the weekly newspaper Morgenbladet, strikes a more emphatically approving note. “I think Norwegians would find it interesting. It’s not just a gimmick, it has integrity, it’s touching. At the same time, I wonder if people want to deal with it. We all related to it at the time and we talk about it as a national trauma but I wonder who will come to see it.”

One voice urging her fellow countrymen to take a look –“It’s great, very serious. They are doing this in a good way” – is that of 26-year-old Tonje Kristensen, who survived Breivik’s killing spree by continually moving around Utøya, even though she badly damaged her back jumping from a second-floor window. It’s not a chapter she wishes to relive in detail again – she wells up when I ask her what it’s like to confront such painful memories – but the feeling of unreality described in the play as the shooting unfolds struck a powerful chord.

“I felt I was closer to death than I have ever been before,” she explains. “That’s a very special sensation that you don’t often get – it’s different from being scared. I think they really nailed that feeling – you’re not just scared, you’re terrified.”

Having made a concerted effort to move on, and not to dwell obsessively, as Claire does, on the whys and wherefores of the atrocity, she still understands why there would be such a compulsion to puzzle over it all. “I think everyone felt affected by it, not just the people who were at some of the places that he attacked. Maybe for some people it’s stronger even though they weren’t at Utøya.”

Can a play like this usefully add anything? She nods but it is perhaps Larsen – the man who plays, almost, not quite, the man who tried to kill her – who puts it best: “We don’t set out to answer all the questions. It’s as if we are in a massively large dark room and have lit a tiny match – and we have shed a little light in there, knowing that we are only going to find out so much before it burns out.”